In Her Words: Notes from Indian Country 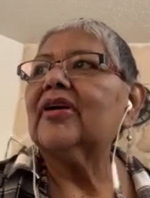 Leslie Randall, RN, PhD, MPH, Member of the Willewah Band of the Nez Perce Tribe, WSU Tribal Advisory Board Member
Utilizing storytelling to transmit educational messages is a traditional method practiced by many American Indian tribes. The stories often illustrate consequences of behaviors and invite listeners to come to their own conclusions after personal reflection. When asked about her journey to becoming a nurse and her thoughts on the health of Indian Country and how we can get more Native youth practicing health care, Nez Perce tribe member and nurse, Leslie Randall, shared the following story.

When I think about why I got into medicine, it goes back to looking down at my mother in her casket. I remember thinking, “Why did she have to die? She’s so young and so beautiful.” It’s those questions I asked when I went to school, when I decided what to do my research on.

But, to tell you the answers to the questions you’re asking, ‘how I ended up being a nurse’ and ‘what does health currently look like in Indian Country’ and ‘how do we get more Native youth into health care’, first, I need to tell you more about who I am. The best way to tell you about who I am is telling you where I came from, and it’s been a long journey. I am an enrolled member of the Nez Perce Tribe and my family is mostly from the Willewah band in Oregon. I’ve known my family in Oregon since I was a baby, as we kept close ties. When my mother and father separated, I went to live with my grandmother. It was hard when we were growing up; we lived sustainably, where you had to go get your own food. My grandfather was a great hunter though, and kept us fed with elk, deer, and salmon.

With both grandparents on both sides, with both grandmothers, they taught me very traditional ways of doing things, and what foods to eat, and teas, and all sorts of stuff. This is one of the ways that we can teach children healthy lifestyles. We can take them out to gather these goods.

On my father’s side, I am a descendent of Ollokot, who was war chief during the war we had with the government. He was in charge of the younger warriors, who were not as restrained, so he had to restrain a lot of them, but they still defended us quite well.

I grew up on a reservation until I was 15 and then got a scholarship to St. Edward’s University in Austin, Texas. I didn’t survive there because I was so lonely. And that’s the story of a lot of our young people—they have family back on the reservation they are responsible for, they have family events they need to be there for, but the family can’t afford to bring them back. I dropped out of college and didn’t go back until I was in my 30s, when I was a single mother with two children under the age of 5, but still managed to get my nursing degree from Oregon Health & Science University. I could do the coursework, but I was so tired by the time I got to clinicals, I was just barely walking.

People wanted me to take the MCATs, but I kept thinking about what it would cost me to go to medical school and how far I would have to go—I had no support system there. My family was here and I could see them anytime I wanted to. Part of the problem with our students, it is difficult for them to be in college and maintain their connections to the reservation. They are expected to come back.

When we think about getting Native youth into college and into health professions, you have to look at who is willing to go. The ones who are willing, these are the ones who we can entice into education—into nursing, pharmacy, medicine, or public health. They’re likely to stay if they’re interested. But we have to get them interested when they’re young.

After my bachelor’s, I was able to get my master’s in public health, but, according to IHS, I was “too educated,” for any of their positions, so they offered me a research position with Dr. Tom Welty in Aberdeen. He was an incredible person. He raised a bunch of us. He taught us everything we know about being in the community, he showed us, he made us do it. He told us, “You have to meet with the community. You have to get their permission. You can’t just go there and say this is what I’m going to do.”

Mentoring is important. I have tried to be a mentor—encouraged students to go as far as they can, then they can call their own shots. I often tried to catch the students when they were going into nursing school. I would talk with students who were ready to give up because it was hard. I often say, “Whatever it is, just keep going. Don’t stop getting your education.”

People must acknowledge the barriers that are in the way of Native youth going into a health profession. There is institutional racism. It was there when I was in nursing school. I would watch the discrimination against those of us who were of color. I think about how difficult it was to even get a ‘C’ in my clinicals, I had to do ‘A’ work. The young white women, they would be giggling and laughing, distracting in classes—I watched them be singled out to go further, encouraged to get the better education, get the scholarships.

Whether they’re Indian or not, as long as they are people of color, they need help. We need to increase the number of people of color in health care, increase their ability to get into school and stay there. We need young people in nursing, we need to get them into medical school, get into pharmacy. These professionals are desperately needed on any reservation.

I have to go off the reservation for most of my care, I don’t get to see any Indian providers, but sometimes I do get to see people of color, and that makes a difference as far as I’m concerned. I keep telling my people, “Go out and get the experience, then come back. We need providers, we need someone that people can look at and say, ‘oh, it is possible’.”

Off the reservation, the problem with many of these providers, they assume, especially with the elders, that our people can make their own appointments and navigate the online scheduling. But it is really easy to get lost in that system. Off the reservation, our people feel like they’re not being treated well, that they’re getting care that isn’t as good. They want to see an Indian doctor, on our reservation.

Our tribe needs the ability to hire more health care professionals, offer them good wages. If necessary, offer them housing. That is one of our biggest problems, trying to find a place for our providers to live. If we want to hire from IHS, we have to go to a website, and download applications. If a tribe does not have internet access, which a fair amount of reservations don’t, they can’t apply for help. We need affordable internet access.

WSU Native American Health Sciences is doing great work. I think about Robbie Paul, who started much of this work. She basically had to do it on her own. She had to go after grants and funding by herself. She laid the foundation for current director, Naomi Bender, and I really respect what Dr. Bender is doing and that she is taking it further. She’s managed to bring in funds and instructors that are good role models.

If anyone is going to invest in anything, it should be in Dr. Bender’s work she’s doing with the high school students and the undergraduate and graduate students. The work she is doing is essential. You have to be out there, and a lot of us can’t be anymore. We’re depending on her, we trust her, to continue the work she’s doing.