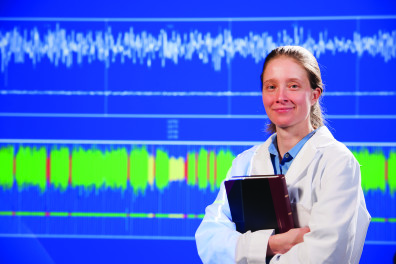 Dr. Eva Szentirmai is researching the link between obesity and sleep loss.

Recent studies have linked obesity and chronic sleep loss, but scientists still don’t know how the two are related. Éva Szentirmai, M.D., Ph.D. (pictured above), an assistant professor in the College of Medical Sciences, is looking at brown fat to help find the answer. She and her colleagues recently received a five-year, $1.8 million grant from the National Institutes of Health to study this beneficial fat, which helps us burn the calories stored in white fat and regulates our body temperature.

Until recently, it was thought that only newborns have brown fat. Scientists now know that nearly all adult humans have brown fat, but its activity level varies with age and other factors. Earlier studies conducted by Dr. Szentirmai in mice showed that sleep loss activates brown fat, and that this increase in brown fat activity triggers a sleep response. When allowed to sleep, mice without brown fat got less sleep overall and less deep sleep than mice with normal brown fat activity.

In this new study, Dr. Szentirmai is looking to find out how brown fat interacts with the brain to regulate sleep. She will look more closely at specific neuronal and cellular mechanisms that she thinks play a role based on previous findings. Her work could open the door to the development of new drugs to combat obesity, metabolic syndrome, and chronic sleep loss.

“If we can restore normal brown fat activity, that could lead to weight loss and normal sleep activity,” Dr. Szentirmai said.

Life is tough for premature infants in the neonatal intensive care unit (NICU). On top of the wide range of health problems these babies experience, they undergo an average of 12 painful procedures in their first two weeks, said Martin Schiavenato, Ph.D., an associate professor of nursing and a former NICU nurse. Worse yet, they have no way to clearly communicate their level of pain.

“No other population is as vulnerable,” he said. “Their central nervous system is not fully developed yet, and there’s mounting evidence that pain contributes to brain deficiencies that may lead to blindness, cerebral palsy, cognitive disabilities, and other conditions.”

For more than six years, Schiavenato has worked with medical engineers to develop technology to objectively measure and communicate the level of pain and distress in infants. A patent for their pain measurement system was granted in 2014. They are still refining their prototype device and hope to see it start appearing in hospital NICUs within three to five years.

The device will measure three signals that indicate pain or distress in newborns: hand flexing, heart rate variability, and facial grimacing. It uses a baseline measurement taken while babies are at ease and communicates changes through an attached LED bulb that changes color depending on the pain level detected.

Schiavenato said the device will help NICU staff improve pain management. He said the currently used pen-and-paper pain assessment scales are subjective and time-consuming and provide only a snapshot of the pain experienced.

Schiavenato’s pain management technology could also be adapted for future use with nonverbal adult patients.

Avoiding sunburn is important, as too much exposure to the ultraviolet (UV) radiation in sunlight can increase your risk of developing melanoma and other skin cancers. Newly published research by a WSU scientist suggests that the circadian clock—the molecular mechanism that keeps our bodies on a 24-hour cycle—plays a role in how well the skin can defend itself from the sun’s harmful effects.

Shobhan Gaddameedhi, Ph.D., an assistant professor in the College of Pharmacy, studied mice that were exposed to the same dose of UV radiation at different times of the day. He found that early-morning UV exposure—between 4 a.m. and 9 a.m.—caused the most cell death and skin inflammation. Gaddameedhi said that this is because the repair function of their skin cells is at its lowest during that timeframe, while DNA replication is at its highest. He noted that since mice are nocturnal, the opposite should be true for us humans, suggesting that late afternoon sun exposure may put us at the greatest risk of skin cancer.

Gaddameedhi said that although further studies are needed to confirm the validity of his findings in humans, his work helps to fill a considerable gap in the science on melanoma.

“Once we know the mechanism by which the circadian clock influences tumor development and we can identify the biomarkers, we can use that knowledge to improve diagnosis and prevention efforts,” he said.

His paper was published in the April 2015 issue of the Journal of Investigative Dermatology.

Driven by rising correction costs and shrinking budgets and backed by the Obama administration, states are turning to ‘smart justice’ approaches to maintaining public safety. In 2012, Washington state became the first in the nation to implement one such approach on a statewide level: the swift-and-certain sanction model for offenders who violate the terms of their community supervision (parole or probation). Now, with grant funding from the Laura and John Arnold Foundation, a team of WSU criminal justice faculty is evaluating the model as other states are watching with interest.

Based on a highly successful pilot program in Hawaii, Washington state’s swift-and-certain program calls for quick, automatic punishment for low-risk violations. Failing a drug test or missing a parole meeting will land offenders in jail for a couple of days, whereas previously they could rack up countless violations before facing a much longer prison stay. The new approach is based on the premise that the immediacy and certainty of a sanction have more impact than the length of confinement.

With help from Assistant Research Professor Alex Kigerl, Ph.D., Hamilton and van Wormer are comparing prison days, reconvictions, cost, and other outcomes for offenders released to the community before and after implementation of the new model. Preliminary results suggest that the new approach helps reduce violations and reconfinements in the nearly 17,000 offenders currently supervised by the state.

Pharmacy researchers have found a mechanism by which omega-3 fatty acids inhibit the growth and spread of prostate cancer cells. The findings, which are at odds with a 2013 study asserting that omega-3s increase the risk of prostate cancer, point the way to more effective anti-cancer drugs.

Scientists have long known that omega 3s reduce inflammation and have anti-diabetic effects, and some recently discovered how this happens.

The 2013 study found that men with higher levels of omega-3 fatty acids in their blood had a greater risk of developing prostate cancer. It was not clear if the fatty acids came from food or supplements like fish oil.

Working with prostate cell cultures, Meier and two students, Ze Liu and Mandi Hopkins, found the fatty acids bind to a receptor called FFA4, for “free fatty acid receptor 4.” Rather than stimulating cancer cells, the receptor acts as a signal to inhibit growth factors, suppressing proliferation of the cancer cells.

“This kind of knowledge could lead us to better treat or prevent cancer because now we know how it works,” Meier said. The study also found that a drug mimicking the action of omega 3s can work as well or better than fatty acids in suppressing the cancer cells. The study appears in the Journal of Pharmacology and Experimental Therapeutics.

Meier said it is still unclear if the effect can be obtained by taking dietary supplements like fish oil. Moreover, the effect of fish oil could fade as it is digested, while data from this study suggest that an omega-3 drug needs to be in a cancer cell all the time to have an effect.

“It’s very difficult in dietary studies to tell how much to take or what form to take,” Meier said. “Once you have a drug, you can test very precisely whether it works or not in a certain disease and you would know exactly how much to give people.”