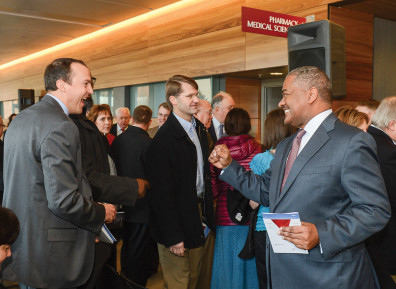 The late Elson S. Floyd was a frequent visitor to Spokane during the last year of his life.

He had this notion that Washington State University could start a medical school, and it wasn’t long before he persuaded others that WSU really was perfectly capable of doing such a thing, and furthermore, that it was WSU’s mission as the state’s land grant university to do so.

“Elson will not only be remembered as our most impactful president to date, but as the one who convinced us just how great we can be,” is how WSU Board of Regents member Mike Worthy explained it.

The WSU Elson S. Floyd College of Medicine is now well on its way to welcoming its first class of medical students. Faculty have been hired, a team is working on getting the medical school nationally accredited, and the first dean of the college was hired and began work in October. The goal is to begin classes in August 2017.

Floyd died at the age of 59 in Pullman on June 20 of complications from colon cancer, just 15 days after he took a leave of absence from his job as president of WSU. His weight loss was considerable between January and June, but he persevered and continued to work, which included making several trips to Olympia to persuade legislators to change an antiquated law in order to permit a second public medical school to operate in the state, and to allocate $2.5 million to WSU to create it.

He lived to see the law changed and was there in Olympia on April 1 when Gov. Jay Inslee signed the new law, but he missed the legislature’s decision to allocate the startup funds to WSU, which occurred 10 days after he died.

“Isn’t it amazing what one gifted Cougar has done for the whole state of Washington,” Gov. Inslee said at Floyd’s memorial service in Pullman on Aug. 26. Inslee said Floyd was “one of the greatest Washington leaders ever.” 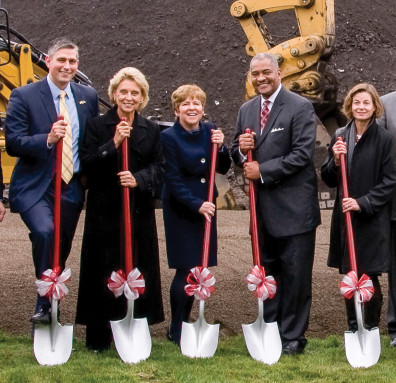 Floyd was known for getting out and spending time with the students, whether it was sitting in the student section at sports events, or talking with them as he made his way across campus, or allowing them to use space in his home for meetings. They fondly referred to him as “E-Flo.”

His widow Carmento Floyd told the thousands of students, employees and leaders from all over the state of Washington who gathered for his memorial service in Pullman that Elson referred to the WSU students as his “28,000 children” and he had great expectations for all of them.

Under Floyd’s leadership, WSU consolidated the health sciences programs on its Spokane campus and expanded access to higher education by growing the WSU campuses in Spokane, Tri-Cities and Vancouver, and establishing WSU North Puget Sound at Everett.

“President Floyd embraced Spokane’s vision and led the development of WSU Spokane as a health science education and research campus,” said WSU Spokane Chancellor Lisa Brown. “He will be remembered as one of our city’s most transformative leaders.”

Floyd had many friends in Spokane, among them community leader Rich Hadley, the recently retired president of Greater Spokane Incorporated (GSI). Hadley and GSI played a large role in persuading the Washington Legislature to fund the construction of the newest building which houses medical education on the WSU Spokane campus. It opened in 2013. Hadley retired from GSI last spring but continued to actively support Floyd’s push for a WSU medical school until the school was approved.

“Elson’s legacy, the Elson S. Floyd College of Medicine, was made possible by his clear vision, his audacious presence, his constant tenacity, and his exceptional leadership,” Hadley said.  “Elson was a champion and he made us feel the same.” 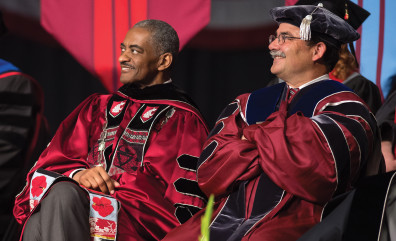 After a search for the next president is completed and the new president appointed, Bernardo said he expects to return to his prior position as provost, a position now shared by Vice Provost Erica Austin and Ron Mittelhammer, dean of the College of Agricultural, Human, and Natural Resource Sciences (CAHNRS).

In his last meeting with Floyd, the president told him, “Move forward without me,” Bernardo said. So, with the help of the entire leadership team, he has done just that.

Funding: WSU has launched a private support campaign for the accreditation, implementation and operation of the new medical school. Phase 1 of the campaign is support for the Dr. Elson S. Floyd Medical Education Founders Fund.

Student Success: The University is focused on enhancing undergraduate student success, with particular focus on its first- year retention rate.

Research: Departments have been more strategic in research by reorganizing and focusing on five key research areas known as the “Grand Challenges.”

Meeting needs: WSU is developing the University Center at Everett to serve the advanced manufacturing and aerospace industries in the region.

“I am a Coug through and through,” Bernardo said. “I hope that my experience at WSU will move the university forward at the speed and with the quality that will allow an easy transition for our next president.”

Previously, Bernardo served as vice president for Agriculture and Extension and dean of CAHNRS, the largest college in the University. In that position, he was responsible for administering teaching, research and outreach programs in food, agriculture, natural resources and human sciences.

Together, CAHNRS and WSU Extension have more than 2,200 employees and an annual operating budget of more than $180 million. As dean of CAHNRS, he led efforts to reinvigorate WSU’s food and agricultural programs, including raising more than $220 million in private contributions to fund endowed chairs, facility improvements and programmatic activities.