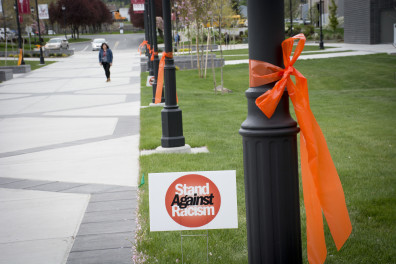 The WSU Spokane Diversity Committee is always looking for something new.

That subcommittee formed in 2008 and includes representatives from Eastern Washington University as well. On Jan. 28 it will receive a WSU Martin Luther King, Jr. Distinguished Service Award at a ceremony in Pullman.

Some of the ideas Zamora and her committee have come up with include being involved at the Hispanic Heritage Festival, where WSU Spokane students gave blood glucose and blood pressure tests to attendees. The committee has also brought speakers to campus and has hosted movie nights.

“Our biggest event when we first started was Noemi Ban, a Holocaust survivor,” Zamora said, as she begins to list past events. “In 2014 we were part of the Hispanic Film Festival. Last February we showed ‘More Than a Month.’ We showed a film for Diversity Week called ‘The Mickey Mouse Monopoly.’

The events the committee hosts are all aimed at simply raising awareness about issues of diversity in our culture.

This year, the committee intends to focus on diversity issues specific to higher education. The Diversity Committee will meet once a month to discuss specific case studies selected by a facilitator.

And from Feb. 1 through March 11, the committee will sponsor an exhibit on campus called “Opening Doors: Contemporary African American Academic Surgeons.” The exhibit – hosted in the Spokane Academic Library on campus – celebrates the contributions African American surgeons and educators make to the medical education industry. It will be free and open to the public (pictured at right).

There are also student diversity clubs on campus, and those clubs take the lead during Diversity Week. The committee assists the students clubs.

The committee has raised awareness for a number of years, and Zamora says she and her committee members are looking to move to the next phase.

“It’s nice to acknowledge that we’re still in the education and awareness stage,” she said. “We’d like to take the next step beyond awareness.”