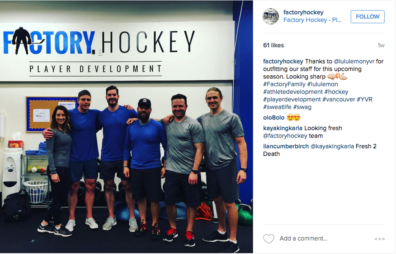 Chelsea Kerley always knew she wanted a health career where she could work with people.

After considering dermatology and nursing careers, she discovered WSU Spokane’s Nutrition and Exercise Physiology program while working at the WSU rec center in Pullman.

Now, the graduating senior will take her diploma to Vancouver, B.C. and begin a summer internship at Factory Hockey, an offseason training facility for current and aspiring National Hockey League players.

Factory Hockey’s client list includes Stanley Cup winners, Olympic gold medalists and future stars. Kerley will get to work with all of them, using what she learned at WSU Spokane.

“One thing I’m really interested in talking to them about is their pregame meal,” she said. “For hockey players, it’s always pasta and it’s weird to me that that’s their pregame meal because to me, I don’t think that’s ideal. I’d want to work in the perfect protein and carbohydrates balance.”

Kerley is familiar with hockey players and the hockey culture as well. She grew up in Spokane being friends with the daughter of Mike Babcock, the former head coach of the Spokane Chiefs. Her boyfriend is former Chief Anthony Bardaro, who is also a Factory Hockey client.

“They try and alleviate any tension in the muscles before they actually work the muscles,” Kerley said. “They roll around on the ball until they find a position that is really uncomfortable and then they just sit there and don’t move. Eventually the muscle kind of releases, and it’s the weirdest feeling but it’s so amazing when you do feel it.”

As for after the internship, Kerley would love to stick around.

“I would love if they took me on as an employee,” she said. “(Factory Hockey) currently has no female staff members. I’m hoping to help promote them to female hockey players.”

Kerley’s studies in the NEP program gave her physiology knowledge and skills. The staff at Factory Hockey all have backgrounds in kinesiology.

Kerley will get to learn from Ilan Cumberbirch, a former player and owner of Factory Hockey.

“He’s taught me a lot already and will be such a huge asset to me during this internship,” she said.