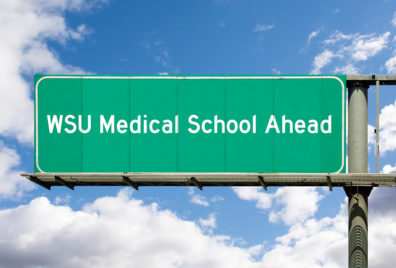 He spoke about training more doctors in Washington to alleviate the state’s physician shortage and about using WSU’s stature as the state’s land-grant university to extend the new school’s influence into every county.

Nearly a year after his passing as the new school that now bears Floyd’s name is in the process of being created, the expectations are high. Prospective students are contacting the school to find out when they can apply. Several of Washington’s health care providers have signed agreements to teach WSU medical students in clinical rotations. And Founding Dean John Tomkowiak, M.D., is leading the effort to give the state’s newest publicly-funded medical school its own unique identity.

“We are so excited” 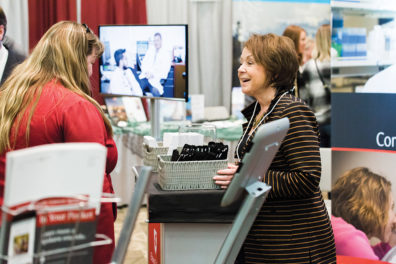 It was an admittedly friendly audience.

It was a late Thursday afternoon and dozens of WSU Cougar alumni business owners had set up displays in a ballroom at the Washington State Convention Center in downtown Seattle for the annual “CougsFirst!” trade show.

The booth for the new Elson S. Floyd College of Medicine sat on a strategically busy corner. A few paces away people waited in line for samples from Doubleback Winery, owned by former Cougar football quarterback Drew Bledsoe. Trade show participants with their glasses of red wine wandered by the College of Medicine booth and were greeted by Vice Dean Jim Zimmerman or other college administrators with a handshake and a question, “Have you heard about our new medical school?”

Guests enthusiastically responded – and even initiated conversations – with comments such as “We’re so excited” or “This is the right time for this.” They talked about how the medical school would add to WSU’s stature as a Tier 1 research university and they commended the visionary leadership of President Floyd.

Others said they had heard about the proposal, but knew few of the details. They asked questions about when the medical school would begin teaching students, about the status of the accreditation process and where prospective applicants could find more information.

Many of the same questions were asked by members of a different audience – healthcare providers – the following week at the Northwest Rural Health Conference in Spokane, where the college also sponsored a booth.

“The most common feeling expressed was the hope that our College of Medicine will help increase the supply of primary care physicians,” said George Novan, the associate dean for Student Affairs.

“I had some great conversations with physicians and administrators from facilities in rural and underserved areas in Washington who are interested in working on strengthening the pathway for local students to a career as a physician,” said Yvette Roubideaux, the associate dean for Diversity, Inclusion and Leadership. “Some want more information about how to be involved in teaching medical students. They also want to know how the college can help them recruit physicians to work in their communities.”

Before the college can begin training students, it must first earn its preliminary accreditation from the Liaison Committee on Medical Education (LCME), the accrediting agency for allopathic medical schools in the U.S. and Canada.

In February, the LCME granted the Elson S. Floyd College of Medicine “candidate” status. In late June, the agency will send an expert review team to Spokane to pore over the college’s application, ask hard questions and report on the school’s readiness to begin teaching medical students.

Then at its meeting in October, the agency may determine whether WSU’s medical school is ready to recruit and admit students. If that permission is given, the college expects to immediately begin a marketing campaign to attract potential students.

One theme that will likely be part of that campaign has been used from the beginning of WSU’s effort to create a medical school: students will have the opportunity to learn how to provide primary care, especially to patients in rural and urban underserved areas. That appeals to prospective students who have sent email inquiries to the college.

In addition, the college has identified several other themes designed to help it stand out from other medical schools. All were developed from ideas raised during a culture building workshop led by the dean in December. The first theme is allowing students to personalize their education.

“That means we will not only provide them with a rigorous academic and clinical education, but we will also help them define and start down the paths which they choose to follow,” said Tomkowiak. “It’s something few medical schools do. We want to become really good at it.”

Tomkowiak also wants to create physician leaders and entrepreneurs. He says the school plans to build into its curriculum a series of courses designed to develop students’ leadership skills. Graduates will receive a certificate in leadership.

Finally, he wants to create for students a lifetime bond with their medical school.

“Once our students graduate and move into the workforce, we want them to use their connection to the Elson S. Floyd College of Medicine as a way to further their careers and build networks with other healthcare providers,” Tomkowiak said. “We think the phrase ‘Once a Coug, Always a Coug’ is apropos.”

For WSU alumni, “Once a Coug, Always a Coug” is a powerful message, one that guides the “CougsFirst!” gathering in Seattle. Ten or 12 years from now, it’s not hard to imagine WSU-trained physicians participating in the event, perpetuating President Floyd’s dream of Cougar doctors serving their communities. 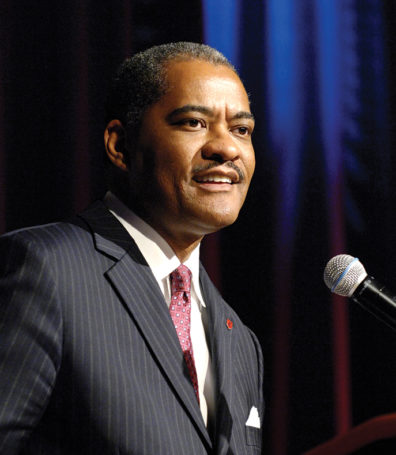 “This medical school is….about the improvement of the quality of life for Washingtonians. It’s about making sure that they will have access to high-quality health care. It’s about making sure that they will go into our hospitals and to our clinics, understanding and knowing that they are being cared for by some of the best and brightest who went through a training program that was collaborative in nature but responsive to the needs of the communities in which they were part of. And we will do that in conjunction with every community in this state. Every community. That’s the visionary part of it, if you will. Is it bold? Absolutely. Is it audacious? Yes. It’s necessary. And we’re going to do everything as we can as a university to make sure that we deliver high quality medical care.”