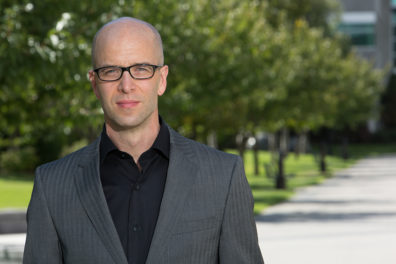 What’s next for Spokane’s University District? Will it be the hub of innovation, collaboration and higher education for the region?

Mark Mansfield envisions it will.

In 2015, Mansfield was back in Spokane visiting his parents. He had been living in Oslo, Norway, for 12 years and during his visit to his hometown, he got word that Spokane’s University District was looking for its first executive director.

His visit to Spokane ended up being longer than expected and on June 15, 2015, the Downtown Spokane Partnership announced that Mansfield would be the U-District’s executive director.

“Here you have everybody around the table and they’ve already been working together for a long time to find a way to serve the associated interests of all these universities and the collective interests on the community,” Mansfield said of the job’s attraction. “There’s the vision, there’s political will and there’s this interest in transforming Spokane.”

His biography seems to highlight his diverse interests, but that’s not how he sees it.

“I see it as having one interest: this intersection of business and architecture development,” he said. “It’s architecture as a facet of culture, and that is a multi-faceted interest that needs an integrated solution and approach.”

It’s this viewpoint that drives his vision for the U-District.

The district has seen the Washington State University Spokane campus grow into a health sciences leader. Two housing projects are nearing completion, and Gonzaga recently opened its new Hemmingson Center. WSU Spokane is in the early stages of developing the Jensen-Byrd warehouse building site, and the U-District Gateway Pedestrian Bridge is on the horizon.

But Mansfield doesn’t view those projects as simply pieces of development.

“There’s this expectation to focus on the object, the aesthetics of the buildings we have in the city,” he said. “And though those are great interests of mine, what’s most transformative is what happens in those buildings.”

He used the Hemmingson Center and the Jensen-Byrd project as prime examples.

“As different as those buildings are, they can be drawn together to the degree that both of these development projects are very much considering not just their campus but the larger community that they’re meant for,” he said.

He also cited Toolbox, the business incubator that recently opened in the U-District.

“(Toolbox) is where you have the community coming together for entrepreneurship, for startups, for commercialization,” Mansfield said. “You can experience the sparks of that environment.” 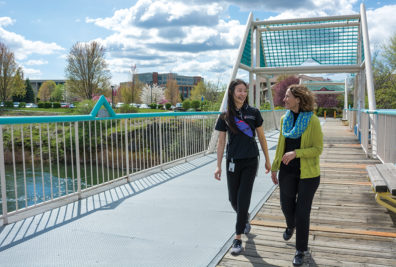 One major initiative on the horizon for the U-District is the WSU medical school. What grabs the headlines in regards to that initiative is typically the increase in medical students in Spokane and around the state, as well as the potential for more research activity.

Mansfield looks one step further and points out that the potential for commercialized research could be the biggest benefit down the road. The fact that Spokane will have a WSU medical school and a UW medical education program opens up bigger markets for spinoff opportunities.

Mansfield takes a somewhat philosophical, yet practical, approach to leading the U-District. While much of the public sees the tangible developments in the district, Mansfield places more emphasis on the impact those developments can have on the community.

With this mindset, it’s no wonder Spokane was recently selected by Envision America as one of 10 cities nationwide to deploy “Smart City” technologies to produce data to determine how to build our city. Spokane’s U-District is the focal point for this initiative.

Spokane has changed since Mansfield last lived here, and the U-District could be the site for the next wave of change.

“The University District,” Mansfield said, “is this opportunity to re-conceive the city we want to live in.”