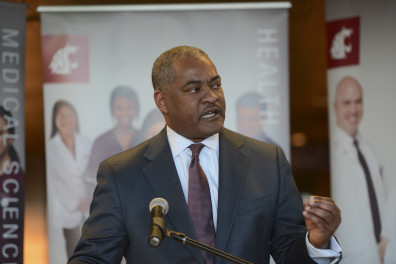 The Washington State House Higher Education Committee held a hearing today to learn about House Bill 1559, which would – among other things – allow WSU to operate a medical school. WSU President Elson Floyd was among those testifying in support of the bill.

The bill, introduced by Rep. Marcus Riccelli (D-Spokane), calls for a policy change and has no funding attached to it. A companion bill in the Senate – introduced by Sen. Michael Baumgartner (R-Spokane), mirrors the House bill.

In addition to this policy change, WSU is seeking $2.5 million in startup operating funds to begin the process of accreditation for a medical school in Spokane.

Fast forward to the 1:05:35 mark in this video to watch the hearing.

Already, there are 65 co-sponsors of Riccelli’s bill. In the Senate, there are 18 co-sponsors. The $2.5 million would be included in the state’s operating budget, which the legislature must approve – with Governor Jay Inslee’s signature – by the end of April when the legislative session officially ends. Of course, there is always the chance of a special session if the legislature needs more time.

With K-12 education and transportation expected to dominate budget discussions, we’ll keep an eye on the medical school issue.