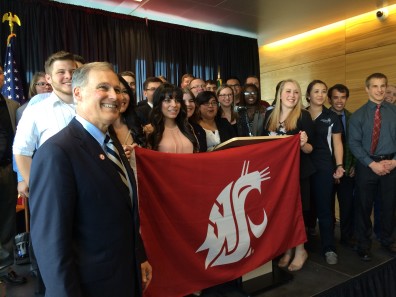 Governor Jay Inslee visited campus yesterday for an afternoon celebration of the start of WSU’s new medical school to be located in Spokane.

“We are all Cougs today,” he said shortly after taking the stage in front of a crowd of about 200.

Inslee signed legislation this week allowing WSU to operate a medical school. As the legislature continues its budget negotiations, we should soon learn the amount of funding WSU will receive. Both budget proposals have included money for WSU’s new medical school.

WSU President Elson Floyd said a WSU medical school, “is about the improvement of the quality of life for Washingtonians.” He added that the university will move quickly to apply for accreditation. It won’t be on normal time, he said, but rather “Elson time.”

As lawmakers debate budgets in Olympia, WSU leaders will begin forming curriculum, hiring the founding dean and much more. The community-based model this medical school will follow means it will partner with existing hospitals and clinics throughout the entire state for third- and fourth-year medical studies.