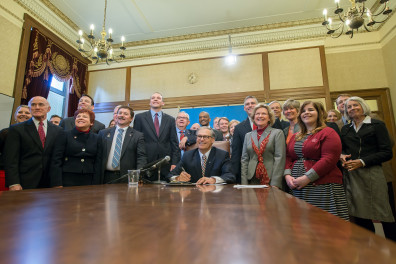 Bill signing ceremonies conducted by governors are often joyous occasions that formalize legislative achievements. But rarely do they lead to spontaneous pep rallies, as happened on April 1.

A few people in the crowd circling the governor joined him while WSU President Elson S. Floyd stepped forward to shake Inslee’s hand.

The bill the governor signed was simple in its scope. It essentially adds one sentence to a 1917 state law that gave the University of Washington exclusive rights to offer public medical education in the state. There was no money attached to the bill. Still, the process of building support for, and passing it, was not an easy one and it represents one small and important step toward alleviating a physician shortage in parts of rural Washington.

It’s been about a year since Floyd and WSU Spokane Chancellor Lisa Brown told  Spokane business and medical leaders that the University was interested in creating its own medical school, in addition to continuing in its role as an affiliate of the University of Washington’s WWAMI (Washington Wyoming Alaska Montana Idaho) medical education program.

The University hired the consulting firm MGT of America to study the feasibility of a WSU College of Medicine. Its report released last summer concluded the University has the tools and experience it needs to operate its own medical school.

With study in hand, Floyd, Brown and College of Medical Sciences Acting Dean Ken Roberts asked the Board of Regents in September for permission to pursue a medical school. The Regents endorsed the proposal.

“The Washington State University Board of Regents made a historic decision this morning,” was how Floyd announced the vote in an online column he released that day. It was historic because Washington has had only one publicly-funded medical school during the last 70 years, thanks to the 1917 law. It accepts about 120 students from Washington per year, one of the lowest ratios of medical students-to-population in the nation. (A private school, Pacific Northwest University, opened in Yakima; its first class began in 2008.)

Before WSU could create a new College of Medicine, the University needed the legislature to change that 98-year-old state law.

Through the fall and early winter, Floyd, Brown and Roberts traveled the state to gather support from legislators, health care and local elected officials. They focused their message on a few points:

Two Spokane legislators, Baumgartner and Rep. Marcus Riccelli, sponsored bills in their respective chambers that would change the 1917 law. Riccelli signed up 64 co-sponsors in the 98-member House; Baumgartner signed up 17 co-sponsors in the 49-member Senate. Their non-partisan stewardship in guiding the bills through several hearings and votes gave the WSU medical school bill big majority support in both chambers.

With the governor’s signature on the bill, the next step is funding. WSU has asked lawmakers for $2.5 million over the next two years to begin the accreditation process for the new school.

Meanwhile, Roberts and his administrative team have begun the work of creating a medical school. They are identifying and developing the curriculum they plan to teach. They are working to create the infrastructure for a WSU College of Medicine, including the support systems students will need. They are also talking with potential partners who would teach third- and fourth-year medical students in clinical settings in Spokane, the Tri-Cities, Vancouver and Everett, where WSU has established branch campuses.

The excitement that led to the singing of the Cougar fight song in the governor’s office has spread. Potential students from as near as Spokane and as far away as Pakistan have begun asking questions about when they can apply for admission. WSU can’t begin recruiting or admitting students until it attains a certain level of accreditation. That’s not expected until at least next year.

But for those who dream about attending medical school in Spokane and perhaps careers as physicians in small Northwest communities, the opportunity may not be far away.