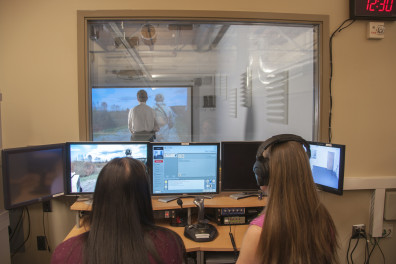 Research conducted in the Criminal Justice program at WSU Spokane has succeeded in changing practices and policies of local and national law enforcement agencies, as well as connected local law enforcement more strongly to the University.

Steve James, a researcher in Criminal Justice, recently landed a contract with the Spokane Police Department (SPD) to help the department learn why force is used in certain situations.

“It’s science that is informing training, which in the policing world is somewhat novel,” James said.

Past research conducted by other entities had participants simply pressing a “shoot” or “don’t shoot” button when presented with a possibly deadly encounter. The research on the WSU Spokane campus is much more realistic and measures the way the brain works, reaction time and more.

“We kind of flipped that on its head and said, ‘no, that’s not realistic enough,’” Lois James said. “So we came up with a new way of looking at bias and decisions to shoot, which is testing people in deadly force judgment and decision-making simulators.”

The research used video simulations of the types of encounters police officers often face, like vehicle stops and domestic disturbances. Participants used modified firearms and other equipment that are connected to the research team’s computers to measure various things like reaction time and brain activity.

Participants must offer commands to the suspect on the video screen, draw their firearm and decide whether to pull the trigger – exactly the type of decisions police officers must make on the streets.

“This method of investigating police officer behavior is what we believe is the most realistic and complex one that we can achieve in a lab setting,” Lois James said. 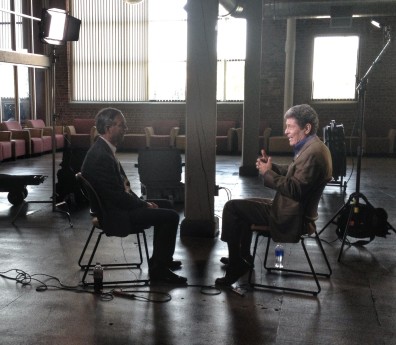 Bryan Vila sits down for an interview with CNN.

Vila, a former police chief himself, has published research looking at police officers and distracted driving. It has been cited as the basis for policy changes in various police and sheriff departments across the country.

A common police squad car has all of the features a normal vehicle would, plus a lot of additional features, including a full-size laptop. Officers need this equipment to do their job properly, but with that technology comes drawbacks.

All over the country officers are involved in accidents due to their use of the technology inside their vehicles while driving.

Vila and his team used state-of-the-art simulators to measure how police officers’ driving is impacted by the distractions within the vehicle.

The policy is the result of a deadly accident caused by an officer using his in-car computer.

Vila told the Los Angeles Daily News that the policy change is “consistent with the best scientific evidence.”

The work of Vila and Steve and Lois James has also resulted in Frontier Behavioral Health, the SPD and WSU Spokane joining together to hold a conference in July on campus to provide training to about 250 first responders, mental health professionals, mental health consumers and family members.

The change occurring because of the research on the WSU Spokane campus gives the criminal justice system an opportunity to be better understood.

“When (the criminal justice system) is talked about in the media, it’s often talked about as a faceless, nameless entity,” Steve James said. “One of the things our research does is try to bring back the fact that these are real human beings making decisions in real time under real stressors.”