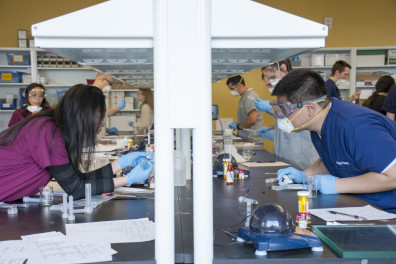 The WSU College of Pharmacy and the private Pacific Northwest University of Health Sciences (PNWU) recently finalized an agreement to offer the WSU Doctor of Pharmacy (Pharm.D.) degree on the PNWU campus in Yakima, beginning in August.

The collaboration between the public and private universities is fairly unique, according to Linda Garrelts Maclean, associate dean of the college.  “It will allow WSU student pharmacists and PNWU students of osteopathic medicine to learn to care for patients as a team, an important aspect of WSU’s health sciences philosophy.”

The goal of this collaboration is to prepare pharmacists who specifically want to care for patients in new and different ways, particularly in underserved populations in rural settings.  An innovative curriculum model and grading system will also assist in this effort.

Pharmacy’s transition to an “Honors-Satisfactory-Fail” curricular grading model that began in fall 2013 in Spokane will be extended to the new Yakima students.

The traditional grading model (also known as grading on a curve) evaluates student performance relative to the performance of other students in the class. With the Honors-Satisfactory-Fail (HSF) grading model, one student’s success is not dependent on the poor performance of another student, and the model allows faculty to measure student competency and achievement on well-defined learning objectives.

After the first year of the HSF grading model in Spokane, it is clear that the college is doing something right. Traditionally, students are most likely to fall behind between the fall and spring semesters of their first year, meaning they would not be allowed to move forward as the result of failing a class. Pharmacy would normally see about 10 percent of students falling behind within the first year, with the majority falling behind between the first and second semesters.

With the new HSF grading model, every first-year student pharmacist moved forward after the first semester with only one student required to be held back at the end of the first year, giving the Class of 2018 an attrition rate of only one percent after their first year.

The Yakima extension provides the college an opportunity to adopt a new curricular model, which aligns with its commitment to the best possible educational experience for all students.

College faculty have agreed to move forward with a “flipped” classroom model, where content will be recorded ahead of time, and other reading and coursework is assigned prior to class. Faculty will be present in both Spokane and Yakima to lead classroom time that is focused on assessing understanding of pre-class material, clarifying concepts and answering student questions, working on problem-based activities, engagement in team-based learning, or active participation in case discussion that provides context for the learning that occurred prior to class.

Classroom time is therefore “freed” from the traditional lecture model, and the college can dedicate the liberated classroom to improving the learning experience not just for Yakima student pharmacists, but everyone. Lectures are poorly suited to the likes of collaboration, problem-solving, engagement, active-learning, peer-instruction, discussion, or discovery, said Stuart Muller, Ph.D., extension project manager, and yet these are the key ingredients for better learning, higher learning, and happier learning. Instead of offering classes of lectures, the College will offer classes that deliver all of these components.

“Though the territory is new to many of us, we are blazing a well-marked trail,” Muller said. “The proposed classroom model follows a clear trend in higher education toward learner-centered teaching, and is built upon sound pedagogical knowledge. Integrating this flipped classroom with a competency-based HSF grading model equates to a learning environment that is truly innovative and effective.”

The Accreditation Council for Pharmacy Education (ACPE) released a draft of their revised standards for accreditation in February 2014. These new accreditation standards will go into effect in the fall of 2016, and will require all Pharm.D. programs across the country to adopt elements of learner-centered teaching methods that are focused on educational outcomes.

“The WSU College of Pharmacy is just ahead of the curve, no pun intended,” Muller said.