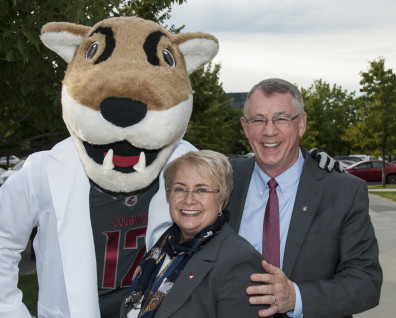 Brian Pitcher, Ph.D., is retiring June 1 from Washington State University after more than ten years in senior administration. Pitcher was provost at the University of Idaho when he was appointed WSU Spokane chancellor in January 2005.

Pitcher was chosen for the position by WSU President Lane Rawlins. He was recognized as a consensus builder and an expert in organizational change. Both were needed for guiding the next phase of the development of a campus that was flourishing. During his eight-year tenure, there were significant capital improvements made:

During Pitcher’s tenure as chancellor, WSU Spokane refined its focus to become a highly competitive graduate and professional research institution in the health sciences.

WSU President Elson S. Floyd said he appreciates the many contributions Pitcher made during his tenure at WSU.

“I want to thank him for the significant progress he made for WSU during his time as chancellor in Spokane and more recently through his focus on programs at all our campuses.”

In January 2013 Pitcher became the WSU vice provost for regional programs with responsibilities for coordinating WSU academic affairs across all urban branch campuses. Pitcher will retire as chancellor emeritus.