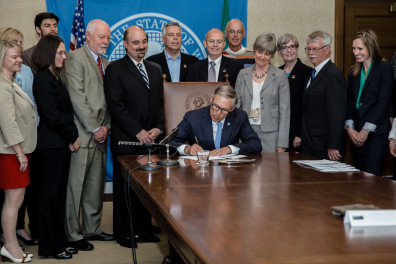 The state of Washington became a leader in the pharmacy profession this week when Gov. Jay Inslee signed legislation making it the first state in the nation to require that pharmacists be recognized as health care providers, and that they be included in health insurance provider networks.

The bill – SB 5557, sponsored by Sen. Linda Evans Parlette (R-Wenatchee), a WSU graduate – means pharmacists now join physicians, nurse practitioners and physician assistants as recognized health care providers in the state. An advisory committee will work out the details this summer, and time will be allowed for health insurance providers to include pharmacists. The law will become official in January of 2017.

Alumni, faculty and students at the WSU College of Pharmacy participated in the work that led to the successful legislation. Many were present to witness the bill signing in Olympia on May 11.