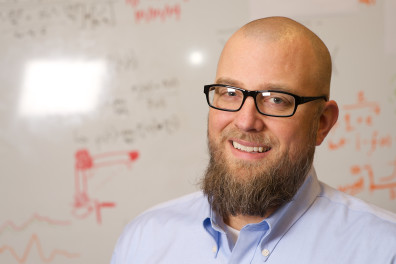 Mark VanDam is a researcher in the Speech and Hearing Sciences Department here at WSU Spokane. Speaking at the annual meeting of the Acoustical Society of America, VanDam provided a research-based answer to an interesting question:

After studying 11 families with toddlers (kids around 2.5 years old), VanDam and his team found that moms are the ones that use baby talk whereas dads speak to their children in tones similar to those spoken in the presence of adults.

The findings have been featured by The Seattle Times and TIME.

VanDam found that moms raised their pitch by 40 hertz, while dads had no significant change in pitch.

Does this make either a better parent? Of course not.

As the Times put it:

Although motherese is believed to be a bonding tool, a kind of communication that’s particularly engaging to young children, the fathers’ style is likely equally important, [VanDam] said.

“We think that the fathers are doing things that are conducive to their children’s learning but in a different way,” he said. “Moms provide the link to the intimate or the domestic. Dads provide a link to the outside world.”

Also interesting is what kinds of songs moms and dads sing to their babies. Tonya Bergeson-Dana of the Indiana University Medical School and the Babytalk Research Center noted a different genre of music moms and dads choose to sing:

“Even in singing to babies, moms will sing ‘Twinkle, Twinkle,’ and ‘ABC’ and dads will sing rock songs,” she told the Times.

VanDam’s conclusions are based on research, and that helps us understand the mother-child and father-child dynamic a letter better.