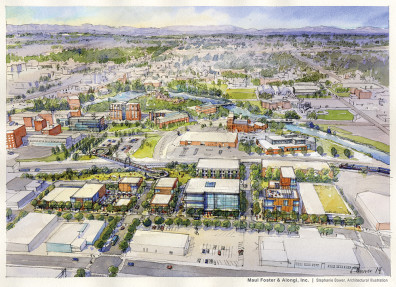 With plans to develop the Jensen Byrd property on the southwest end of campus, construct the Spokane Teaching Health Clinic on the southeast end, and host the north landing of the gateway bridge that will cross over the railroad tracks on the south side of campus, expansion at WSU Spokane continues.

The state legislature’s June passage of a transportation budget that completed funding of an important gateway to campus was applauded for its foresight in adding to the revitalization and prosperity of downtown Spokane and the south portion of the University District. The University District gateway bridge will provide bikers and walkers access over the railroad tracks that separate the campus from the lower south hill and the medical community.

Once that barrier between Division Street and Hamilton Street is removed, students and researchers who live south of that area will be able to walk or bike from home to campus and to the hospitals for clinical rotations and research trials.

“This monumental project would not have happened without the continued belief in the project and dedication to its success,” said Mark Mansfield, executive director of the University District. “Over the last 10 years, the bridge project has garnered the support of the Spokane City Council, the University District Public Development Authority and the Washington State Legislature as well as our federal delegation because of its promise as a linchpin for economic revitalization, its ability to increase active transportation by decreasing automobile dependency, and the strong sense of place it provides to the University District and downtown Spokane.”

Mansfield said the project is a bridge to opportunities of Spokane’s future and will stand as a landmark, calling attention to the commitments and visions of growth and opportunity of the region while making new connections in the city possible.

With designs already in place, the city anticipates the project will start in 2017. Of key importance is the phasing of it with surrounding developments so that completion of the landings corresponds with and further enhances the people-first agenda of the University District, Mansfield said.

This fall WSU accepted proposals from developers for lease of the Jensen Byrd building and nearby property.

Jim Kolva, a member of Chancellor Lisa Brown’s Advisory Council, said the proposals represent an exciting time for the Spokane community. “The University is reviewing ideas that acknowledge the historic nature of the Jensen Byrd building, are compatible with the mission of a health sciences campus, and will add to the revitalization and prosperity of downtown Spokane and the U District,” he said.

Situated on the southwest end of the campus, adjacent to the city core, the land is designated in the campus master plan for potential mixed use development with the long-term future goal of satisfying campus facility needs.

Negotiations are to be completed by August. 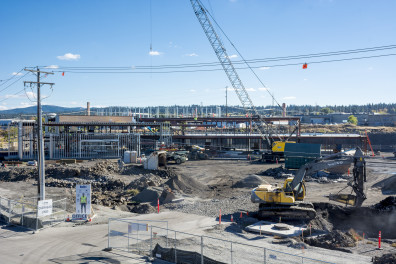 Construction of the Spokane Teaching Health Clinic in October, 2015.

The project closest to completion is the Spokane Teaching Health Clinic (STHC), which will be finished by summer 2016.

While construction is being funded by WSU, the clinic will provide a place for medical residents to provide health care while working with medical, nursing, pharmacy and other health sciences students on the WSU Spokane campus.

This project came together as a result of collaboration among WSU, Providence Health Care and Empire Health Foundation, whose goal is to increase the number of medical residencies in Eastern Washington.

Where physicians do their residency often determines where they will live. The shortage of internal and family medicine physicians, also known as primary care physicians, will decrease with this effort, as well as with the new medical school.

Recently the consortium was awarded $800,000 over three years for an SBIRT (Screening, Brief Intervention and Referral to Treatment) grant, allowing graduate-level health professions education for students in Doctor of Nursing Practice, Pharmacy and Medicine programs and for participants in Family Medicine, Internal Medicine and Psychiatry residency programs, currently being transitioned from Providence Health Care sponsorship to the STHC.

The grant is from the Substance Abuse and Mental Health Services Administration.  Participants will interact through an inter-professional training program at the STHC, receiving clinical experience in primary care settings, safety net clinics and behavioral health centers in eastern Washington and northern Idaho. The emphasis is on enrolling students who want to stay in primary care, including those who want to practice in rural settings. Because of this, the patient population served both during and after the training program includes low income, rural, elderly and others who have difficulty accessing health care.

Currently substance abuse disorders treatment training is limited across all the education programs that are included in this proposal, so the addition of SBIRT training will have substantial impact.

“Through training of faculty and preceptors and integration of the grant learnings into the curricula of all programs participating in the STHC, we will develop inter-professional teams that are better able to meet the needs of patients who may be dealing with substance use disorders,” said Traci Couture, operations director of the STHC.