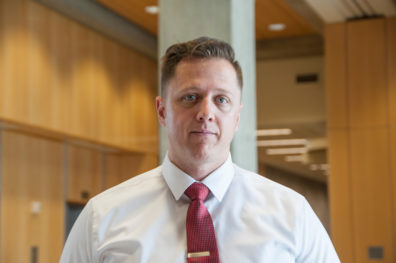 Editor’s Note: Spotlight Students are nominated by staff and faculty at WSU Spokane and are recognized during commencement for their dedication, commitment, sacrifice and/or ability to overcome great odds to succeed as a student. They are selected by a committee ahead of commencement. WSU Spokane will feature a Spotlight Student each day through May 13.

To say Jacob Zwierstra’s military experience is well-rounded would be an understatement.

The Health Policy and Administration (HPA) graduate has served in the Air Force, the Coast Guard, the Alaska Air National Guard and will soon join the Navy.

During his time in the Air Force, Zwierstra deployed in support of Operation Enduring Freedom in the fall of 2004.

Zwierstra left the Air Force in 2009 and joined the Coast Guard, where he was assigned to the Engineering Department as a Fireman, qualified as a communications watch stander, boarding team member, 47’ Motor Life Boat Engineer, and boat crew member on all three small boats.

He left he Coast Guard to join the Alaska Air National Guard and deployed again – this time to Camp Bastion, Afghanistan in 2012.

During his time in the military, Zwierstra was awarded the Meritorious Service Medal, Air Force Commendation Medal and Air Force Achievement Medal.

He served as a teaching assistant in WSU Spokane’s HPA program and is earning his master’s degree while supporting a family. He has volunteered at the Inland Northwest Blood Center and with the St. Baldrick’s Foundation.