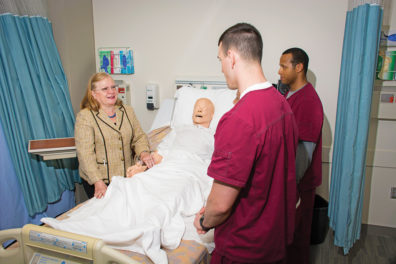 The new dean of the College of Nursing arrived in April with more than 25 years of experience in academic nursing.

Dean Joyce P. Griffin-Sobel, Ph.D., R.N., is the college’s seventh dean and succeeds Patricia Butterfield, Ph.D., who returned to the faculty and her research.

“I am so honored to be joining WSU as dean of the College of Nursing,” Griffin-Sobel said. “I am deeply committed to interprofessional education and practice, as it is the foundation for moving health care toward improved quality and patient-centered care.”

WSU Interim President Daniel Bernardo noted that the College of Nursing is known for its intercollegiate foundation, its accomplished educators, researchers, and students, and its impact on the state’s workforce.

“It is the anchor of our Spokane campus and fundamental to our community and to the future of health care in the state,” Bernardo said. “I am excited that someone of Dr. Griffin-Sobel’s caliber will be moving it forward.”

“My career in nursing education is centered on educating nurses to be leaders in health care with in-depth technological sophistication, comprehensive experiential knowledge acquired in simulation and clinical practice, and outstanding teaching,” Griffin-Sobel said. “I was attracted to WSU because of its faculty, its research programs, and its commitment to the student experience. I am excited to work with the WSU community to continue its legacy of creating the best prepared nurses to care for Washington’s citizens.” 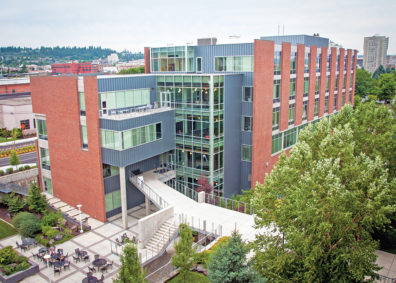 Griffin-Sobel led the SUNY College of Nursing through two successful accreditations, created a dedicated education unit in a behavioral health center where graduate students and faculty delivered integrated primary care, and led a major increase in research and scholarship.

At Hunter, Griffin-Sobel was principal investigator for New York City Nursing Education Consortium in Technology, a HRSA-funded faculty development grant in teaching with technology, including simulation, informatics, telehealth and mobile health. She was instrumental in the nursing school’s successful application to the National League for Nursing to be named a Center of Excellence in 2010. Griffin-Sobel also aided in the creation of partnerships for academic progression of students from junior to senior colleges within the City University of New York system, funded by the Robert Wood Johnson Foundation Partners in Nursing program.