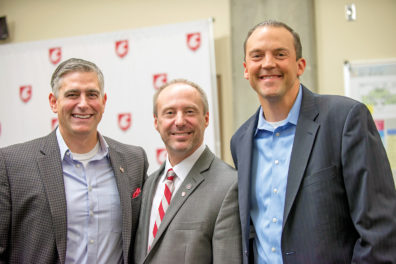 In the short history of Washington State University’s Elson S. Floyd College of Medicine, there have been several momentous events.

The most important and the one that prompted high fives and whoops and hollers heard all the way across the state was the October 19 decision by the Liaison Committee on Medical Education, or LCME – the allopathic medical school accrediting agency in the U.S. and Canada – to grant preliminary accreditation to the college so that it may accept medical students.

“So many people in Spokane, Pullman and across the state had worked so hard on getting us to the point of accreditation that the pressure to ensure we were successful was very high,” said the college’s Founding Dean John Tomkowiak, M.D. “The faculty and staff who spent the last year getting the college ready to operate a medical school were just so excited, and relieved.”

The long-awaited decision was what Tomkowiak and his accreditation team were hoping for as they submitted the required medical school supporting materials and application fee to the LCME last December. It was what team members were thinking about when they hosted an LCME survey team during a three-day site visit to the WSU Spokane campus in June.

And it was what  administrators and faculty members turned their focus to after the accreditors left in June. “We created procedures for evaluating and admitting applicants,” noted Tomkowiak. “We wrote the policies that govern the college operations and how students will be supported.  We worked on finalizing a 21st century curriculum to prepare students to be successful in the most challenging health care environments they might face. We hired support staff and built the technical infrastructure to run the day-to-day business of the college. We formed relationships with health care partners and other stakeholders who will educate WSU medical students around the state.” 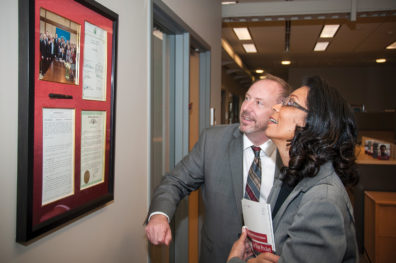 When an event of that importance is anticipated, sometimes it’s hard to concentrate on other business while you wait for the phone call that tells you whether it’s a ‘go’ or ‘no go’ for a fall 2017 class.

Fortunately – and coincidentally – Tomkowiak had something to keep his mind off of the impending vote. On October 20, just after the LCME vote, he and his team were hosting Darrell Kirch, M.D., on the WSU Spokane campus. Kirch is the president and CEO of the Association of American Medical Colleges (AAMC). The AAMC is one of the sponsoring partners of the LCME and an organization the WSU medical school would be eligible to join once it received its preliminary accreditation. Kirch’s visit was a welcomed opportunity for Tomkowiak’s team to brief a national medical education leader about WSU’s medical school. It was also a chance for WSU’s health sciences campus and the Spokane community to ask Kirch about his views on the future of medical education and research in the U.S.

As he prepared for Kirch’s visit, the welcome news of the preliminary accreditation came unexpectedly early the day before the visit: the Elson S. Floyd College of Medicine now had the right to begin accepting students and join the AAMC as members.

The college was now free to share specifics with inquiring potential applicants. Finishing touches were put on a new website catering to applicants. Admissions procedures were finalized.

And the hard work continues. November and December will be extraordinarily busy for the college’s admissions office as the admissions committee and trained stakeholders read the materials sent by applicants, arrange for and conduct interviews and make offers to students. A process that would normally take several months will be compressed into three to four months. The college plans to admit 60 students into its inaugural class.

The timing of the accreditation couldn’t be better. Just as Darrell Kirch’s visit to Spokane helped to elevate the WSU medical school profile, the AAMC’s national conference in Seattle in mid-November should also help to shine the spotlight on the Elson S. Floyd College of Medicine.

Still, judging from the number of inquiries received over the last year, applicants from all over the state already know about WSU’s new medical education plans and are eager to be part of that first class. Elson Floyd would be proud.