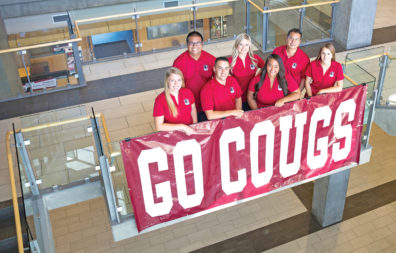 This year’s student government president is all about bringing together students from the different health sciences disciplines.

Doing so allows them to get to know each other and ultimately understand each other’s roles better when they all get out of school and start taking care of patients. 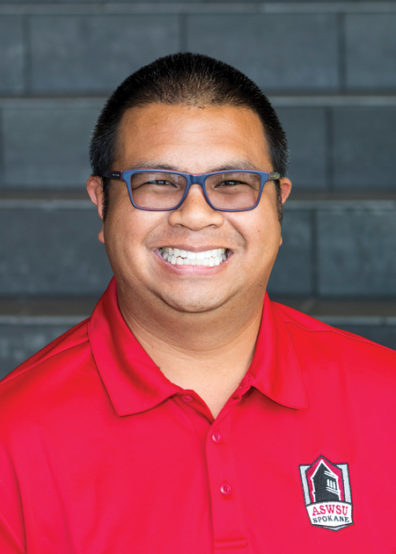 “Spending time at events working with and talking to other students and bringing people together is the most fulfilling part of this job for me,” Nacalaban said. His signature green and blue glasses are indicative of both his sociable demeanor and his passion for the Seattle Seahawks, where he previously worked in marketing.

Nacalaban, left, was busy at the beginning of the semester recruiting other students to serve on various committees and get involved.

“I try to inspire the leadership qualities in others. I want to leave this place better than I found it and I want to pass along my knowledge to the next generation of leaders who are already involved,” said Nacalaban. “There are students out there who don’t know they are leaders yet, and I want to recognize their potential, bring out the best in them and let them know that they can be leaders on campus and in their profession.”

Nacalaban served as the ASWSUS vice president last year and inspired his running mate and the now-vice president, Alec Sisneros, to become involved. Sisneros worked as a student photographer last year while in his first year of pharmacy school and as a result he attended a lot of different campus events. After meeting and talking with Nacalaban, Sisneros decided he liked the idea of helping to create more interprofessional events this year.

“The best part of the job is seeing people at events make friends with someone they wouldn’t otherwise meet,” Sisneros said. “I would like to help create more interprofessional events this year so we have more bonding because we will be working a lot more with each other than the different professions did in the past and the more we can understand each other the more we can help patients.” 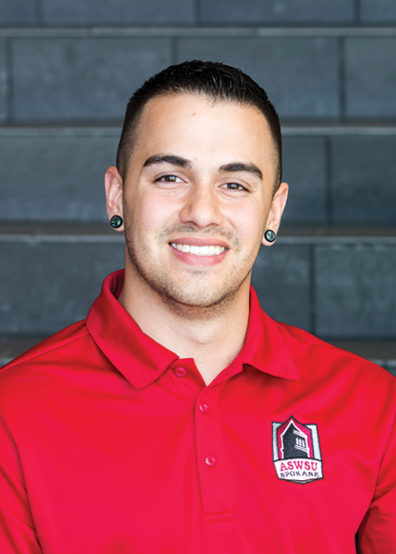 Sisneros, right, is from the Denver suburb of Littleton, Colo., and had never been to Washington state until February 2015 when he came to interview at the WSU College of Pharmacy in Spokane and loved it.

Sisneros got his undergraduate degree in biology with a minor in chemistry at the University of Colorado at Boulder. He had excelled at both those subjects in high school and became interested in pharmacy because an addiction in his family inspired him to learn more about drugs.

Nacalaban is a third-year pharmacy student and will be off campus next year for the clinical rotations that make up his fourth and final year in pharmacy. After getting a bachelor’s degree in chemistry from the University of Washington he found himself working in marketing for the Seattle Seahawks. While that was fun, he started looking around after about four years at how he might combine his interest in sciences with his love of working with people. Pharmacy is the perfect combination for him.

Nacalaban is from Seattle and showed an interest in student body politics in high school but lost his one and only bid for student body president. He didn’t seek an office during his undergraduate years at the UW but when he arrived at the WSU campus in Spokane he saw an opportunity to contribute.

“I’ve always been the kind of person who takes charge and leads,” he said. “I enjoy having that chance to make a difference in someone’s academic career or social life.”

Nacalaban and Sisneros said they spend about 20 hours a week at their ASWSUS jobs.  The other ASWSUS officers are: