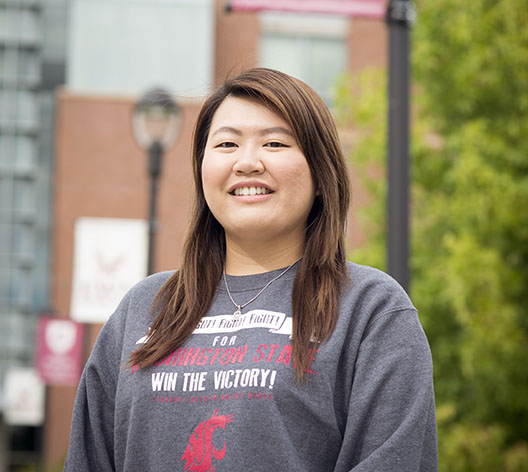 Throughout most of her life until last year, Thanh Thai was a shy student who sat in the back of the classroom by herself. Something happened to her last year during her first year of pharmacy school on this campus, and now she is on the campus Student Entertainment Board and responsible for coordinating the stress-relieving activities for the student body during finals week.

Her story starts when she finished the fourth grade in her hometown in Vietnam and then her parents moved her and her younger brother to Mill Creek, Wash. Her father had his own business as a tailor in Vietnam but her parents wanted their children to have the career opportunities offered in the United States. When they relocated to America, no one in the family of four could speak English.

Thai started the fifth grade in Mill Creek and used her hands a lot to communicate with others (something she has continued to do). Thai was placed in an intensive English class and when she wasn’t studying English, she had some classes with other students. A girl in her class befriended her and over the next few years they worked on English together.

“It was hard,” Thai remembers. “I felt left out, and it also made me stand out.”

That was tough for a shy kid. However, Thai also stood out for another reason. She excelled at math and often was first to finish an exam. Other students began to take notice and ask her for help.

Finally, in the eighth grade Thai tested well enough in English that she no longer had to attend special English classes and she joined her classmates with a regular academic schedule.

As a child Thai dreamed about having many different careers, but ruled them out one by one for various practical reasons. Then in middle school she met a pharmacist who was the aunt of a friend.

“She told me how fun pharmacy was,” Thai said. She was confused by that comment because pharmacists in Vietnam only filled prescriptions and that didn’t seem all that fun. But in high school, Thai chose to do a job shadow with a pharmacist at Costco and found she enjoyed the work and the people.

When she was younger she had ruled out being a doctor or nurse because she thought she would get too attached to her patients and it would not be good for her emotionally. But in pharmacy she could share the responsibility for a patient with other providers, and that was better for her.

After her first year at Cascadia Community College she volunteered as a pharmacy assistant at a Sea Mar clinic serving low-income patients. She found there the same collegiality that she experienced at the Costco pharmacy in high school.

“I discovered then that pharmacy was for me,” she said.

Thai graduated from UW-Bothell with a bachelor’s degree in biology and a minor in chemistry and then spent a year as a biology tutor before starting the Doctor of Pharmacy (Pharm.D.) program at WSU in the fall of 2017.

It was during that first year in pharmacy school last year that something changed for her. She flourished around classmates who helped each other instead of competing. Yes, she said, it helps there are no letter grades in the program, just pass or fail. But the faculty and staff also are very nice and supportive, Thai said.

She felt so good she decided to push herself and so she signed up to be one of five members of the Student Entertainment Board, which plans several campus-wide activities each year. She will coordinate the finals week activities.

This past summer, she visited her mother and grandmother. Both commented how she had gone from shy to “glowing.”

“I’ve seen myself grow this past year,” Thai said. “It’s easier for me to talk to people now.”

Her self-talk also is different.

“I keep telling myself now ‘if you make a mistake, it’s OK, learn from it.’”

Thai is the first person on her mother’s side of the family to go to college, and the first on her father’s side to go into a health care field.

Thai keeps in touch with her younger cousins in Vietnam and talks often to family there via Skype or phone.