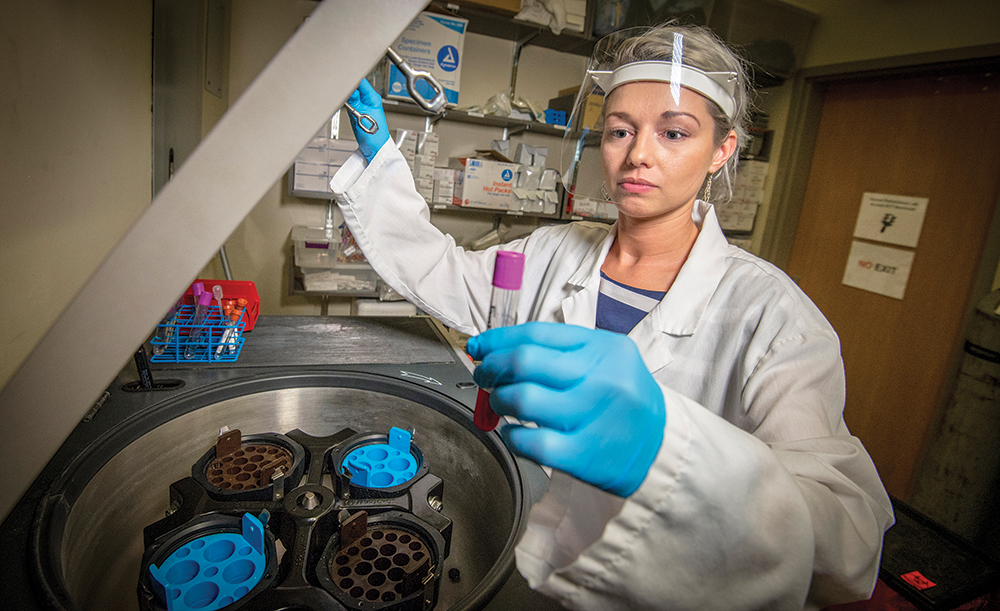 Study co-author Elena Skornyakov loads a blood sample into the cold centrifuge at the sleep laboratory in Spokane.

A study led by WSU researchers has revealed new clues on how night shift work disturbs the body’s metabolism, increasing risk of obesity, diabetes, and other metabolic disorders.

Published in the Proceedings of the National Academy of Sciences in July, the study’s findings suggest that working nights causes the internal rhythms in digestive organs to shift, making them out of sync with the master biological clock in the brain.

Working with colleagues at the University of Surrey, the WSU team studied 14 healthy volunteers who had completed either a three-day simulated day shift schedule or a three-day simulated night shift schedule. The team collected blood samples at three-hour intervals over the following 24-hour period, during which participants were kept awake under carefully controlled conditions that included constant light, temperature, posture, and food intake. After analyzing the samples for metabolites—products of chemical reactions involved in digestion—they found that metabolites related to the liver, gut, and pancreas had shifted by a full 12 hours, even though the master clock in participants’ brains had only moved by about 2 hours.

“No one knew that biological clocks in people’s digestive organs are so profoundly and quickly changed by shift work schedules, even though the brain’s master clock barely adapts to such schedules,” said Hans Van Dongen, Ph. D., director of the WSU Sleep and Performance Research Center and professor in the Elson S. Floyd College of Medicine, who led the study with Shobhan Gaddameedhi, Ph.D., assistant professor in the College of Pharmacy and Pharmaceutical Sciences. “As a result, some biological signals in shift workers’ bodies are saying it’s day while other signals are saying it’s night, which causes disruption of metabolism.”

More research is needed to show whether the shift in rhythms is driven by shift workers’ altered sleep/wake schedules, the shifted timing of their food intake, or both. Once that is known, scientists could work toward developing countermeasure strategies or treatments—such as strategic naps or differently timed food schedules—to get shift workers’ rhythms back in sync.

In addition, the researchers’ work may have implications for the study of other chronic diseases that shift workers are more susceptible to, including breast, prostate, and skin cancer.

“Changes in the metabolism of shift workers may be associated with altered activity of cellular processes that may be involved in cancer development later in life,” Gaddameedhi said. “Once we understand those processes, we could potentially identify the genes involved and find ways to prevent cancer in shift workers.”

With support from a five-year, $7.1 million grant, a new WSU-led research center will work toward identifying and promoting effective treatments to reduce alcohol abuse among Native people. Funded by the National Institute on Alcohol Abuse and Alcoholism, the Native Center for Alcohol Research and Education will combine faculty and resources at WSU, the University of Colorado Denver, and the University of Washington.

Contrary to popular belief, recent research suggests that Native people are less likely to consume alcohol than non-Natives, said principal investigator Dedra Buchwald, M.D., professor in the Elson S. Floyd College of Medicine and director of the WSU Initiative for Research and Education to Advance Community Health (IREACH). However, those who do drink are more likely to engage in heavy drinking and binge drinking. Combined with reduced access to behavioral health care services faced by many American Indians and Alaska Natives, this tendency toward excessive drinking has contributed to high rates of liver disease, birth defects caused by fetal alcohol exposure, homelessness, unemployment, and other issues.

By establishing the center, Buchwald and her colleagues will advance the current state of knowledge and could potentially improve the quality of life for Native people with alcohol use disorders, their families, and their communities.

“We have been describing alcohol abuse in Native communities for decades,” Buchwald said. “It’s time to start developing the types of interventions that are needed and acceptable in these settings so we can ultimately end the alcohol-related devastation experienced by American Indian and Alaska Native peoples.”

The center’s researchers—including 12 Native investigators—will collaborate with tribal partners to test the effectiveness of three interventions in different settings:

The center will also provide junior researchers with grants of up to $40,000 per year for pilot projects related to alcohol use and abuse in Native communities.

A team of researchers at WSU and elsewhere has developed a series of patented chemical compounds that may someday be part of a new drug to combat neurological diseases.

Diseases that could be helped by the new compounds include ALS, as well as Alzheimer’s, Parkinson’s, and Huntington’s. Though different in many ways, one trait these diseases share is the presence and buildup of incorrectly formed proteins in the brain, said Travis Denton, Ph.D., an assistant professor in the College of Pharmacy and Pharmaceutical Sciences. He said the compounds his team has developed, in collaboration with fellow researcher Kenneth Hensley of the Arkansas College of Osteopathic Medicine, help boost autophagy—the brain’s housekeeping function—so it can help clean up these rogue proteins.

“The idea is to create a small-molecule drug that could turn autophagy on when it’s not working properly—which we believe may be the case in patients with neurological diseases—and bring it back to normal,” Denton said. “Our hypothesis is that this could stop the progression of the disease.”

A study with their early-stage compound—LKE—showed that mice with Alzheimer’s disease that had been unable to complete a learning-and-memory-based water navigation task were able to do so after they had been fed LKE. After refining the molecules, Denton and his graduate student, Dunxin Shen, tested the next generation of molecules—LKE-Ps—and found that they stimulated autophagy in human cells better than LKE. And when administered to fruit flies with a familial form of Parkinson’s disease, LKE-P not only increased the flies’ lifespan but also improved their climbing ability, which equates to reducing tremors in Parkinson’s patients.

With funding from a three-year, $466,233 NIH grant, the team is now working on clearing the next hurdle, which is to find out exactly how these compounds work inside the brain. After that, next steps would be to test LKE-P in mice and ensure its safety before they could eventually take it to clinical trials, the first step in a multi-step process toward developing drugs that could be used in the treatment of patients.

Chronic pain did not get worse after patients were discontinued off long-term opioid therapy, WSU researchers found in a recent study.

The research provides important new insights in the fight against opioid misuse.

“One reason why we’re seeing spikes in opioid use disorder all over the country is that it has been prescribed heavily for conditions that may not warrant its use,” said study author Sterling McPherson, Ph.D., an associate professor in the Elson S. Floyd College of Medicine. “And chronic pain is one of the main conditions for which it has been so heavily prescribed.”

Conducted in collaboration with Oregon Health Sciences University and the Portland VA Medical Center, the study was published in the journal Pain in June. It looked at a sample of 551 VA patients who were on long-term opioid therapy for various types of non-cancer chronic pain for at least a year before being weaned off opioids.

The researchers analyzed data from patient medical records for the 12 months following discontinuation. McPherson said their goal was to examine whether they could predict changes in pain intensity following the discontinuation of opioids based on various demographic and health characteristics. They looked at age, sex, race, co-occurring mental health conditions, and number of alternative pain treatment visits. They examined the patient group as a whole and also analyzed the data for four different patient subgroups based on pain levels at discontinuation, which varied from very mild to severe.

To their surprise, they found that nothing predicted pain changes in the whole sample or the subgroups, because there was no significant change in pain levels, on average.

McPherson cautioned that their findings should not be generalized to every patient.

“Our findings are consistent with previous studies, which suggest that the long-term use of opioids for chronic pain might not be as useful as was once thought,” McPherson said. “That’s not to say that some chronic pain patients shouldn’t continue to be on opioids, depending on their situation and their underlying conditions.”

McPherson said the research team plans to delve deeper into the issue. They are currently pursuing funding to investigate other potential adverse outcomes of discontinuing opioids in chronic pain patients, such as increased risk of depression, anxiety, or suicidality.

Read “For Some Patients, Opioids Provide Only Hope” here. 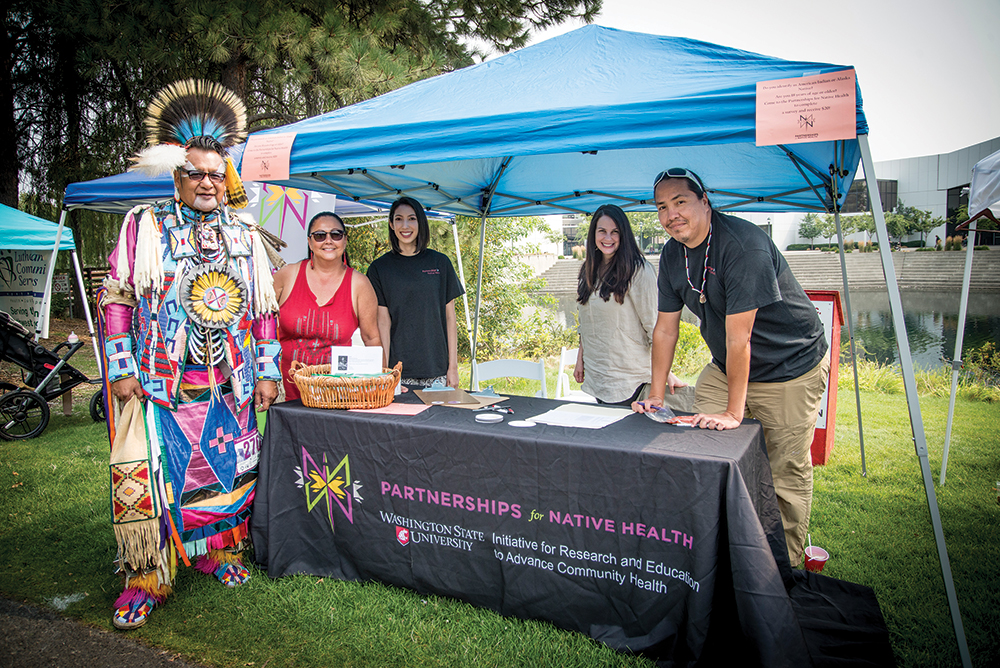 Affecting close to 10 percent of Americans, diabetes has been called a public health epidemic. The disease is especially common in American Indians, who are twice as likely to have diabetes as white Americans and experience the highest rates of kidney failure from diabetes.

Improved diabetes prevention and management in Natives and other minority groups has been a long-time focus for Ka’imi Sinclair, Ph.D., an assistant professor in the College of Nursing and a researcher in the WSU Initiative for Research and Education to Advance Community Health (IREACH). As part of her work, Sinclair tailors diabetes-related health interventions to the cultural values of different groups.

With funding from a five-year, $2.3 million NIH grant, she and her research team are now developing a program to better engage Native American men in weight loss and physical activity to help prevent or delay type 2 diabetes. Their “Strong Men, Strong Communities” program is based on the Diabetes Prevention Lifestyle Change Program, an intervention that has previously been implemented in Native communities across the country. While the implementation project had favorable outcomes among its participants, few men participated in
the program.

“Only a quarter of participants were men, and those who enrolled were more likely to drop out than women,” said Sinclair, who is Western Cherokee.

The WSU team is partnering with tribal organizations to recruit and study 240 overweight or obese Native American men at a reservation in western New York; an urban health clinic in Minneapolis, Minnesota; and a Native community center in Portland, Oregon. Designed with input from focus groups conducted with American Indian men, the intervention will feature 12 one-hour, weekly classes made up of equal parts education and exercise. During a subsequent three-month period, participants will be offered activities to help maintain their physical activity. The researchers will follow the participants for a total of 12 months.

“During that time, we hope to see them lose weight and reduce their risk of developing diabetes,” Sinclair said. “We’ll also learn a lot from them about what motivates Native men to participate and stay in a lifestyle change program.”