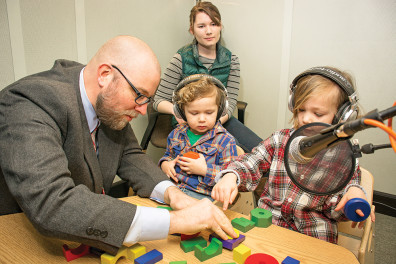 Assistant Professor of Speech and Hearing Sciences Mark VanDam works with young children at the Speech and Language Laboratory.

Here’s a roundup of some of the research work happening at WSU Spokane.

WSU researcher Mark VanDam has joined forces with two colleagues at the University of California Merced and Carnegie Mellon University to create a critical piece of infrastructure for scientists interested in speech and language development and language behavior. With $985,000 in grant funding from the National Science Foundation, the team is building a database of free-to-access, daylong child and family audio recordings, along with a library of open source audio analysis software.

VanDam—an assistant professor in the Elson S. Floyd College of Medicine’s Department of Speech and Hearing Sciences—estimates that the database will initially include 10,000 daylong recordings. More recordings will be added as they are contributed by the research community. By outfitting kids with high-tech, wearable audio recorders, VanDam himself has accumulated an estimated 3,000 recordings of children from birth to preschool age, totaling 35,000 hours of audio. He has used these to answer questions on family communication dynamics, including a well-publicized study that showed that moms and dads communicate differently with small children.

VanDam said that the database—named HomeBank—will contain carefully annotated recordings of both typically developing children and those with speech, hearing, and developmental disorders.

“A data set like this has never existed before,” said VanDam, who said that although the cost of capturing daylong recordings has decreased in recent years, it is still an expensive undertaking. “This will allow us to ask questions that no one has yet been able to ask.”

Physicians may soon have another diagnostic tool to help treat cancer patients, thanks to a new partnership between WSU and a genetic testing company based in India. Under a recently signed licensing agreement, Datar Genetics Ltd. will use a set of genes identified by College of Pharmacy researchers to develop tests to predict prostate cancer recurrence and breast cancer survival. The partnership was facilitated by the WSU Office of Commercialization, which is looking for additional licensing partners in other countries.

The research that led to the identification of the 20 genes was conducted in the lab of Grant Trobridge, an associate professor of pharmaceutical sciences. In work funded by the National Cancer Institute, postdoctoral research associate Arun Nalla used a virus to create genetic mutations in human prostate cancer cells to understand how tumors become androgen independent. Androgen-independent tumors don’t need testosterone to grow and thus no longer respond to hormone therapy, making them much harder to treat. The virus Nalla used can insert its DNA into the genome of a human cell, which made it possible to pinpoint which genes got altered and led to androgen independence. Using a similar approach, Ph.D. student Victor Bii looked for genes that caused breast cancer to spread to other parts of the body.

Trobridge said their work is a small but critical step on the way to their long-term goal of developing targeted cancer therapies. “Ultimately, we’d like to be able to predict which treatments are more likely to work based on patients’ genetic profiles.”

A recent study of the role of rapid eye movement (REM) sleep in the development of young brains suggests that it makes experiences “stick” in the brain. The discovery was published in Science Advances by Professor of Medicine Marcos Frank and his former graduate student Michelle Dumoulin Bridi.

Frank said their findings emphasize the importance of REM sleep in early life and point to a need for caution in using REM-suppressing medications—such as antidepressants and stimulants for ADHD—in young children.

During their study, the researchers had young animals wear a patch over one eye and monitored their brain activity while awake and asleep. Animals in one group were allowed to sleep normally. Others were consistently woken up—some during REM sleep and others during non-REM sleep. The researchers found that those that went without REM sleep didn’t show normal brain development, suggesting that REM sleep is required to solidify changes in the visual cortex, the part of the brain that processes visual information. Furthermore, they found that a brain protein named ERK, which is involved in these types of changes, did not activate in animals that had been deprived of REM sleep.

Frank and Dumoulin Bridi also looked at brain activity patterns during REM sleep and found them to be very similar to those seen during wakefulness.

“It appeared as though animals’ waking experiences were being reactivated while they slept,” said Frank. He said further studies are needed to fully uncover the biochemical process by which REM sleep fixes brain changes, which may eventually lead to new therapies to treat brain injury and neurodegenerative diseases.

Professor of Health Policy and Administration Jae Kennedy is heading up a new initiative to establish the Collaborative on Health Reform and Independent Living, a multi-institutional effort to evaluate the impact of the Affordable Care Act (ACA) on the well-being of working-age adults with disabilities. Funded through a five-year, $2.5 million grant from the National Institute on Disability, Independent Living, and Rehabilitation Research, the collaborative brings together disability advocates and researchers from WSU, the University of Kansas, George Mason University, and the Independent Living Research Utilization program at TIRR Memorial Hermann Hospital.

Until recently, many adults with disabilities did not have access to private health insurance coverage and had to rely on public programs, such as Medicare and Medicaid. With the implementation of the ACA, that has changed.

“The ACA has endured many legal and legislative challenges, and many of its reforms are now a feature of the U.S. health care system,” said Kennedy. “We need to know the magnitude of these changes, and whether they are addressing the pervasive disparities in access and cost that people with disabilities face.”

In partnership with several national disability advocacy organizations, the collaborative’s researchers will conduct five research projects to study health insurance costs, coverage and outcomes; determine information and training needs among staff in centers of independent living; and identify changes in disability program application and enrollment rates. Kennedy said the collaborative’s findings may be used to advocate for policy changes to address any remaining health disparities in this vulnerable population.

A College of Pharmacy researcher has received a five-year, $2.6 million grant from the National Institutes of Health to study how genetic differences affect people’s risk of contracting tobacco-related cancers.

Boeing Distinguished Professor Philip Lazarus will study a group of metabolizing enzymes called UGTs, which help the body excrete carcinogens found in tobacco and tobacco smoke. He and Ana Vergara, a PhD in Pharmaceutical Sciences student, will look to see whether genetic differences in two families of UGTs make smokers more or less susceptible to contracting lung cancer and head and neck cancer. They will also study how differential splicing—variations in the process that helps DNA create enzymes and other proteins—affects the activity of UGTs. Research collaborators at Harvard University and Duke University will validate the team’s findings in tissue samples from a large number of lung and head and neck cancer patients and healthy control subjects.

Lazarus suggested that their study could help step up cancer prevention efforts.

“If we could identify people at highest risk, then we could target these individuals for tobacco cessation,” he said.

In addition, their work could lead to improvements in the treatment of cancer and a host of other conditions.

“A large percentage of drugs are metabolized by UGTs to get excreted,” said Lazarus. “Understanding how UGTs work could help us identify which drugs to give to whom. If a quick genetic test could determine what drugs will or won’t work well for a given individual, that would be a big step forward.”