College of Pharmacy and Pharmaceutical Sciences consolidates its operations in Spokane 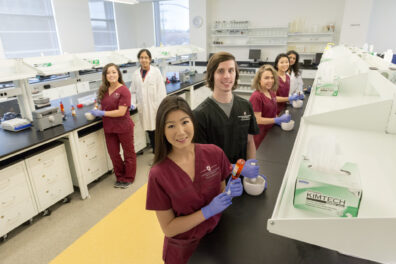 What is now the College of Pharmacy and Pharmaceutical Sciences was once a Pullman-based program, offering its first two years there, with years three and four spent at clinical rotations. It had a presence in Spokane, though not quite as large as it is today. 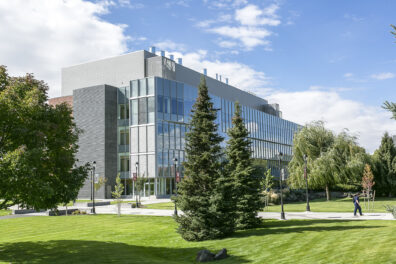 This building was a game-changer. Amid a severe recession, the Spokane community and Washington State University successfully advocated for state funds to build the modern, 125,000 square foot building that houses classrooms, the Walgreen’s Auditorium, research space and offices.

Through the course of two legislative sessions, funding and an official ground-breaking in October 2011. The building began its soft opening in November of 2013 and more than 400 community leaders attended the official opening ceremony in December of 2013. Classes began in the building a month later.

The building catalyzes growth for hundreds of students each year and continues to spur innovative research and programming. Speaking of which…. 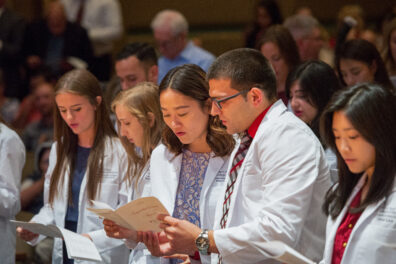 As previously mentioned, WSU was a partner with the University of Washington in the WWAMI Regional Medical Education program, which helped place first-year medical students on the WSU Spokane campus. As the need for more doctors and more access to medical education in Washington —especially in rural and underserved areas— became apparent, WSU set out to create the state’s second public medical school.

While WSU soon announced its plans for its medical school and launched a search for its founding dean, the many supporters of WSU’s plans helped convince the legislature to approve initial start-up funds. Thus, the Elson S. Floyd College of Medicine was born.

Its creation also provided the departments of Speech and Hearing Sciences and Nutrition and Exercise Physiology a college to call home, creating an interprofessional setting for students. The college also helped attract the Institute for Research and Education to Advance Community Health (IREACH), bringing a valuable research institute to the university. 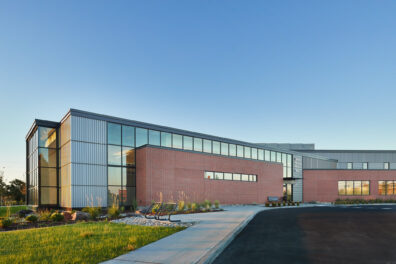 When Providence Health Care needed a new location for its health clinic located on 5th and Browne in Spokane, it worked with WSU and Empire Health Foundation to create a consortium and build a newer, larger clinic on the WSU Health Sciences Spokane campus.

Work on the two-story, 42,000 square foot clinic started with the safe demolition of the old Peirone Produce warehouse and the Spokane Teaching Health Center (STHC) clinic broke ground in May of 2015. The clinic opened in summer of 2016 and recently, the Veteran’s Administration in Spokane announced, in partnership with WSU Health Sciences, that it would soon occupy STHC space to serve local veterans.

The clinic also houses medical residents and has plenty of potential in the future as a hub for health sciences students. 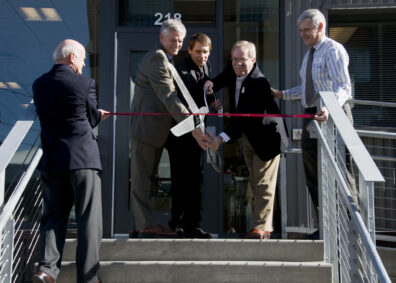 Humans aren’t the only species being treating on the health sciences campus. WSU’s College of Veterinary Medicine has a small but vital presence on campus with its teaching clinic on Spokane Falls Blvd.

The building is a general clinic for customers to bring their household pets, and if a visitor is in the right place at the right time, they might see a horse walking into the clinic.

The clinic also plays an important interprofessional role on campus when it partners with the College of Nursing for Healthy People + Healthy Pets free clinics for low-income individuals and their pets.

Animal health and human health share a connection and having the veterinary teaching clinic on campus helps contribute to the campus’ robust health sciences emphasis.

College of Nursing becomes a leader in simulation training 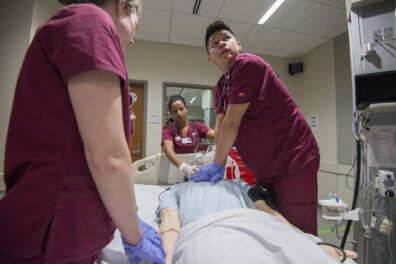 While the campus is celebrating 10 years as WSU’s official health sciences campus, the WSU College of Nursing recently celebrated its 50th anniversary in Spokane (WSU Spokane wasn’t an official campus until 1989). In that time, it’s grown into a model college for simulation training.

In fact, in 2013, the WSU College of Nursing was one of five baccalaureate programs chosen to participate in a landmark National Simulation Study to determine the ideal mix of simulation and clinical training to prepare nurses.

Its simulation training helps prepare the state’s nurses for what they’ll face in hospitals and clinics. It prepared one former student when she was the first to recognize a patient was experiencing a pulmonary embolism.

The simulation lab at the WSU College of Nursing allows students to gain experience working with a “patient” as soon as their junior year of college, helping them to be better nurses by the time they graduate.

College of Medicine grows medical class size from 60 to 80 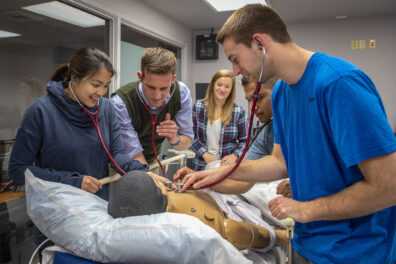 When the Elson S. Floyd College of Medicine welcomed its first cohort of medical students in August of 2017, it was an incredible moment for Washington State University. It welcomed another 60 the next fall, bringing 120 total medical students to WSU Spokane. These students purchase or rent housing, buy clothing, food, movie tickets and more, contributing to the local and regional economy.

The influx also brought a new kind of student to WSU Spokane—one that could easily integrate in interprofessional activities with their counterparts in Nursing, Pharmacy, Nutrition and Exercise Physiology and Speech and Hearing Sciences.

Then, in 2019, the College of Medicine gained state funding to increase the annual class size to 80, per its plan. Current first- and second-year medical students entered as a class of 80, bringing even more students to campus and the community.

The College of Medicine is coming up on its sixth birthday and has four cohorts currently studying to become doctors. It will celebrate its first group of medical school graduates in spring 2021. Its growth from 60 to 80 students per class is a tangible representation of the college’s growth in such little time.

WSU Health Sciences extends its arms across the state of Washington 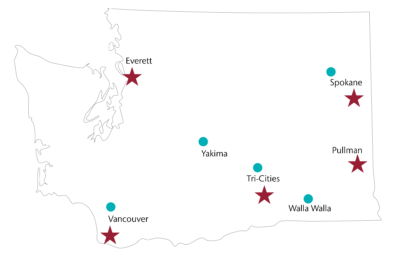 When WSU Spokane became WSU’s official health sciences campus, its mission wasn’t tied only to Spokane. Instead, WSU Health Sciences has taken its programs, headquartered in Spokane, and extended them across the state.

The College of Nursing is in the Tri-Cities and Vancouver and can be found in Yakima as well. In 2015, the College of Pharmacy and Pharmaceutical Sciences partnered with Pacific Northwest University of Health Sciences in Yakima to offer its PharmD degree there. The College of Medicine was formed with the promise of educating students from Washington and employs a community-based model that enables students to train in the kinds of communities and environments where they will eventually practice. Students train primarily in Spokane for their first two years of medical school, and then are distributed across the state to WSU campuses in Everett, Spokane, Tri-Cities and Vancouver for their third and fourth years of clinical education. Medical students gain clinical experience at the college’s more than 150 clinical partners across the state and region.

Soon, WSU doctors will join WSU nurses and pharmacists across communities in Washington in treating patients. 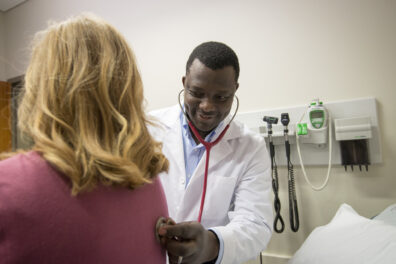 In 2012, to answer the need for more advanced practice nurses, the WSU College of Nursing introduced its Doctor of Nurse Practitioner degree program. Nurse practitioners are nurses with advanced training and education who can perform some of the same tasks as doctors. With physician shortages across Washington, more nurse practitioners can help solve that health care gap.

Nurse practitioners have a median salary of more than $100,000 in the U.S. What’s more, in Washington (and Idaho and Oregon), they can practice independently—this is especially important for rural areas that might not have enough doctors to treat everybody efficiently. 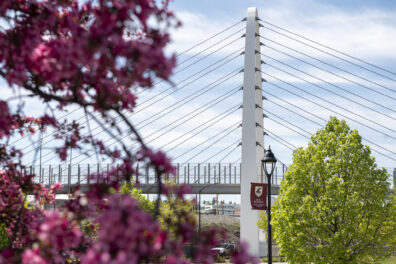 The University District Gateway Bridge isn’t solely a WSU project, but it has an impact on the campus and is a welcome addition to the neighborhood.

The pedestrian bridge opened in the spring of 2019 to much fanfare. It opened a new route from the campus to the Sprague Business District, which has undergone a transformation itself in recent years. Previously, one would have to maneuver around the railroad either by car or on foot or bike—and it wasn’t exactly safe to do so.

Now, the bike- and pedestrian-only bridge allows for the safe passage to and from campus to the south-side of the train tracks.

With future investments already taking shape in the Sprague Business District, the bridge will provide a much-needed connector to future developments.

These 10 highlights and achievements from the past decade certainly aren’t the only ones, and you can suggest others by emailing spok.comm@wsu.edu and explaining your choice(s). Perhaps we’ll post an update with additional achievements!