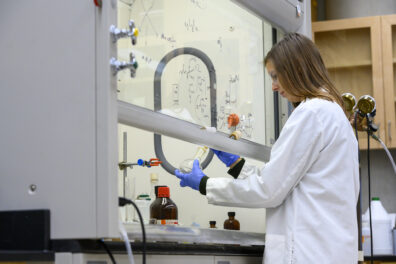 Considering HSSA’s beginnings, the assist makes sense. The Washington legislature created HSSA in 2007 to spur economic development in the life sciences arena, with the authority offering life and health sciences research grants to grow the region’s research capacity. Funding for HSSA comes from county taxes (.02% of Spokane County sales taxes go to HSSA). The Washington State Legislature in 2019 reauthorized HSSA for another 15 years.

When the WSU Board of Regents designated WSU Spokane as the University’s official health sciences campus in 2010, HSSA was an important partner in fulfilling the health sciences mission. At the time, life and health sciences research activity in Spokane was still developing. There was critical need for these life-saving activities—especially in a city with a large health care workforce – and for growing research capacity. HSSA gave WSU Health Sciences Spokane the nudge it needed, and WSU Health Sciences Spokane has become a catalyst for research growth in the area.

The campus transformation started when the College of Pharmacy and Pharmaceutical Sciences consolidated its operations in Spokane. Around the same time, HSSA matched grants that helped the college recruit prolific researchers like Phil Lazarus, Andrea Lazarus, Mike Gibson and Salah Ahmed, and was ultimately responsible for others these researchers have hired. Bringing researchers to campus and to Spokane is an economic development driver and helped grow WSU Spokane’s research portfolio. A critical component of the economic growth is that HSSA requires matching SBIR and STTR grants from the federal government.

Additionally, HSSA helped WSU build out the laboratory equipment in the Research Service Centers on campus—labs that are available for use by other private and public researchers in the region. In fact, 75% of HSSA’s funding goes to research grants. By the way, many of these funds are currently available to local researchers, visit the HSSA website for more details.

HSSA is also an early investor in the Gleason Institute for Neuroscience, envisioning a robust research and innovate patient care treatments. The organization has also handed out grants to private companies familiar to WSU Health Sciences Spokane and its Center for Innovation, including Iasis Molecular Sciences, Novion Technologies, Institute for Systems Medicine, Allele Diagnostics, Photon Biosciences and more.

In all, HSSA has invested $3.5 million in the WSU Health Sciences Spokane campus alone, and the return on investment is huge for the community. In the most recent fiscal year, WSU Health Sciences researchers brought in $37.6 million in research grants and contracts—nearly four times as much as they did in 2010. Every dollar of National Institutes of Health funding creates another nearly $9 to local economies.
In 2010, WSU Spokane employed 453 people. The most recent data—2019—shows the campus employing 751 people, a 66% increase.

Without HSSA’s investments that helped spur the growth of the WSU Health Sciences Spokane campus, we wouldn’t see these kinds of numbers and the economic impact they bring. HSSA’s investments have been both beneficial for WSU and the greater Spokane region, as well as the state by extension. Without HSSA’s early investments, the achievements we’ve seen the past 10 years might not be realized.

In total, HSSA has granted about $8 million since its formation in 2007, which equals support for about 500 jobs in the region. We’re glad the organization saw the vision set forth for WSU Health Sciences Spokane a decade ago.